Ender 5 Plus: How to level your bed.

It’s taken me a while to really get this figured out so I wanted to share because I see so many people with bed level issues. My bed has never been this level and I’m seeing the difference in my prints.

Step 0: Install Klipper.
The rest of this will assume you have Klipper and a BLTouch or similar.

Step 1: Screws Tilt Test.
Klipper has a function that will probe the bed over each screw and tell you how to adjust them to make them even.
You need to define in the config where the screws are first. Assuming you have a stock(ish) E5+, the following should work:

Add that to your config and then restart Klipper.

DISCLAIMER: This works for me but we all know printers are fickle and that every one is unique, with different upgrades. I can’t be held responsible for any damage caused by following these steps. I highly recommend reading all the bed levelling documentation on the Klipper website.

Creality Ender 5 Plus (Mostly stock. Some small upgrades)
Octoprint (Installed on a Mac Mini with an Ubuntu dual boot)
Klipper (Desuuuu fork. This guide is useful for installing)
I have done some minor upgrades, such as the extruder, PTFE tube and fans but nothing that affects the levelling.

PLEASE NOTE: You can’t get directly over the right hand screws, so I’ve got it as close as I can.

The probe will measure over each screw and return a result to your terminal that looks like this:

The front left screw is your baseline and the rest are measured from that. Clockface directions are looking down on your printer. So CW is turn to the left. The hours and minutes indicate how far. 1 hour is a full rotation. Your aim is to get everything under 6 minutes.

If that happens, adjust the front left screw first in the opposite direction, so CCW 3:30, for instance. If you bottom out at any point go back and adjust all other screw in the opposite direction.
We are not aiming for a Z value of 0! This is important.
We get hung up on seeing zeros on the level screens but, actually, being at 2 is fine, as long as they’re all close together. Your Z offst isn’t affected because the bed is still probed at the start of each print. More on that later.
Repeat SCREWS_TILT_CALCULATE as many times as you need to until your numbers are all under 6 minutes. You’ll get better at turning the correct amount as you go.
Once you’re done, run a BED_MESH_CALIBRATE and look at your numbers. You will find you’re within hundredths of a millimeter. Do all this with a cold bed, by the way. Honestly, it doesn’t seem to matter.

The picture is my BED_MESH_CALIBRATE results. N.B. This is after the printer has been off a bunch and stuff. You may have results that start with a 2 or something. But they’ll still all be super close together. 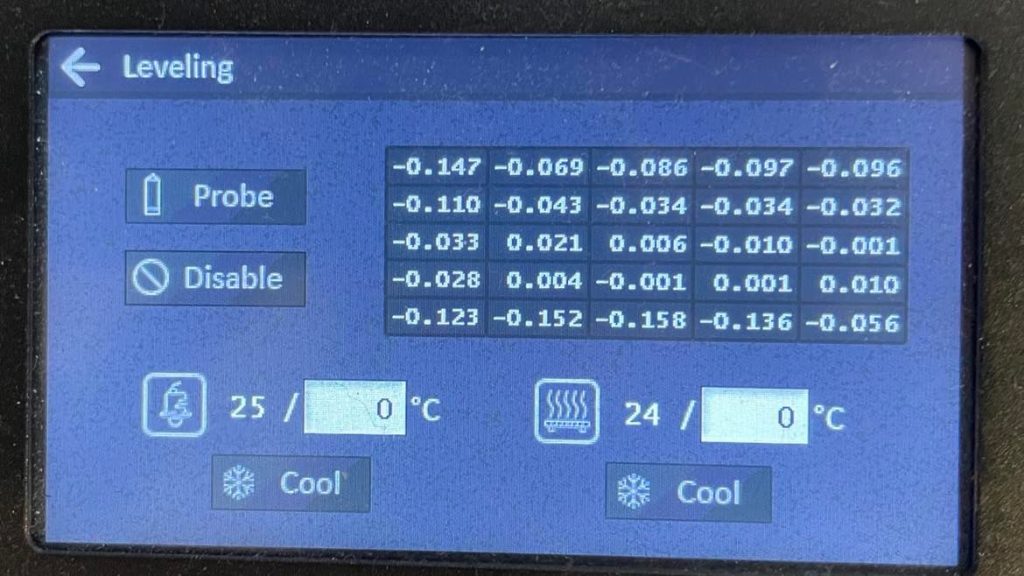 There are some higher areas, but it’s all within two tenths of a mm. It doesn’t matter too much because of step two.

Step 2: Levelling on every print.
HEAR ME OUT! You may have used auto bed levelling when your printer was stock and it sucked so bad and sometimes made that weird triangle on the bed so you avoid it. But we’re running Klipper. Things are different now.
You still need to do the paper test to get your Z offset correct, but -2.59 is generally a good starting point, from what I can tell.
Now the good stuff.
We’re going to add a print start macro to the config and then tell the slicer to run that, instead of all the dumb stuff it wants to do, much of which Klipper ignores anyway.
What we’re going to do is start heating the bed and do a BED_MESH_CALIBRATE whilst it’s heating so there’s no wasted time.
Add the following to your config. Or if you’re fancy, put it in a separate script file and call it but I don’t do that.
I’m not going to lie, I’ve cribbed this from someone and forgotten who. However, theirs didn’t actually work for me, so I have edited and it works on my machine beautifully. Printers are fickle beasts and results my vary.

This is set for my most common print temperatures so you may want to change the bed_temp and ext_temp variables. I also have the CURA purge line included as a separate macro because I like it for priming the nozzle. You can include anything you want your printer to do on the start of a print and the beauty part is you don’t need to reslice if you make a change here because the actions are controlled by the Klipper config, not the slicer. You could make both these commands one macro or use a different priming method.
Then in CURA (or your slicer of choice. You may need to tweak some stuff…) change your start gcode (Preferences>Configure Cura>Printers>Machine Settings) to this:

It needs to be this because, if it isn’t, CURA just adds a load of extra stuff before your start print macro.
It’s very stupid.
When you run your next print, your bed should probe a bed mesh as it heats. The only time I’ve found this annoying is if I’ve had to restart a print a few mintues in becase of some dumb thing I’ve done but I just accept that as punishment for being dumb.
You don’t need to worry about saving the level results. Your bed is level and will level again later. Repeat the screw tilt test every so often. It’s a much faster way of checking your bed level than the long bed mesh calibrations.

Your starting gcode if you open a .gcode file should now look like this:

As you can see, Cura_SteamEngine auto generates stuff and it is bad and stupid.
This is the same model with the M104 and M140 commands in the start gcode removed:

Absolute carnage. This means it will heat first and then probe so the entire point of the exercise is voided.

Assuming you have sucessfully followed all these instructions, your printer should be on top form. Probably check your pressure advance and stuff. Now my bed is *REALLY* level, I definitely need to redo my PA again. In fact, as I write this I have a ringing tower printing and then I’m going to do a square tower!

Any questions, pop them in the comments and I’ll try and answer them.